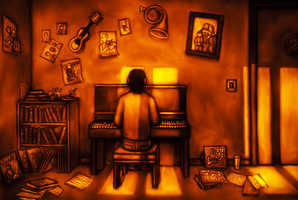 Musician, composer and animator. He has directed and animated three short films and a web series, composed the soundtrack of several short films and three feature films, and has taught animation workshops around the world. Winner of a Goya Award for his 2006 short film SaidÂ´s Journey (2006).

A composer is afflicted by a strange illness: he can hear every noise in the world. Through his music, he will find a way to keep the noise under control. Short film animated frame by frame with plasticine drawings on under-lit glass.