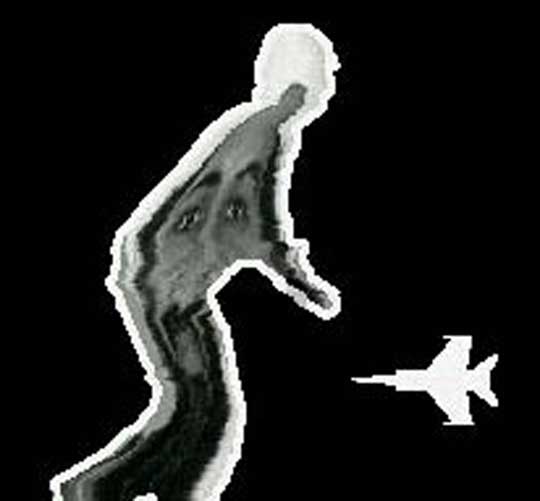 interactive installation
In this installation – originally designed as a video game – the player can slip into the role of a George W. Bush, Osama Bin Laden or Tony Blair and haunt the (game)world with the respective identity. By recording outlines and movements of players via camera and projecting it in real time and size onto the wall, the voluntary players become pieces of the game – their task is either to avoid contact with tanks, submarines or warships of the enemy, to collect oil refineries and Dollar bills or to fight desperate civilians to get to the next level of the game. On one the hand (t)error depicts the cynical discourse on events and the doubtful motives of the war in Iraq on the other hand this piece is an attempt of criticism on today’s game and media culture, characterized by consumption and fun. Using the medium computer game is an irony in itself.

Installation for the defense of romantic nature in German living rooms