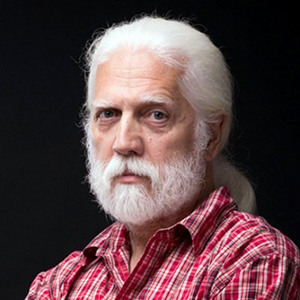 Artistic activity begins in June 1972. with a solo exhibition of conceptual works in the FORMA Gallery in Novi Sad. Since then, he started his professional art career. He has over 30 solo exhibitions and over 250 group exhibitions in the countries of former Yugoslavia, Europe, North and South America and Asia. He participated in all the transparent exhibitions related to New Art Practice, during the seventies and eighties. In the mid-1980s, he began to work intensively with the  video media. He was a representative of the Yugoslavia at the most important video and electronic art events in the world (Ars Electronica, Imagina, AVE, etc.). He also organized a number of lectures, exhibitions and concerts related to computer art. At the beginning of the breakup of Yugoslavia, 1991. he goes to the Netherlands, where he works at the Technical University of Delft. There, he holds a master’s degree in VR and doctorate at object-oriented data banks. Throughout the war, he actively participates in the work of informal groups whose actions manifest themselves through activism through the new media of Interna. He has done a number of independent and collaborative projects and took part in many events (ISEA, Liverpool Biennial, Documents and others) and was a member of the activist and hacking groups in Germany, England and the Netherlands, when he worked under various identities: CyberAnarchyst, MissSaigon , and others.
Since January 2003, together with his partner Maja Budžarov, the art project MP_art is launched, and the main medium of expression is their performance, but also other visual media (video, photography, installations, etc.).
Since 2006 He was employed as a full professor at the Faculty of Technical Sciences, Department of Architecture and Urbanism, University of Novi Sad, and since June 2018 he has been a Dean of the Faculty of Digital Production at EDUCONS University in Sremska Kamenica. At this faculty since 2012 he gives classes related to virtual reality. He is the author of a number of artistic, scientific and professional books.