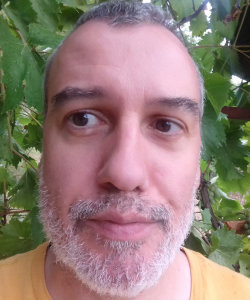 Vladimir Tupanjac (1974, Novi Sad) studied History of Art at the Faculty of Philosophy in Belgrade. Since 1998 he has been writing film critics and texts on pop culture, media and contemporary social phenomenon for daily newspapers, weekly and monthly magazines and publications in Serbia and abroad.
From 1998 to 2001 he worked at the Center for Contemporary Art in Belgrade. He collaborated with the Cultural Center REX and with the New Media Center Kuda.org from Novi Sad. From 2004 to 2013 he was the editor of the program at the Center for Cultural Decontamination in Belgrade. One of the founders and long-time coordinator and editor of the art programs of the Dis-patch festival (Festival of Electronic Music and Related Art Forms, 2002-2007).
He was the curator of the 44th October Salon in Belgrade, member of the Youth Biennale team in Vršac in 2004 and one of the curators of the exhibition “On Normality – Art in Serbia 1989 – 2001” at the Museum of Contemporary Art in Belgrade in 2005. He is one of the founders of the Stand Up tall Productions production company in Amsterdam, with whom he has performed several theater performances, including awarded “Will You Ever Be Happy Again?”.